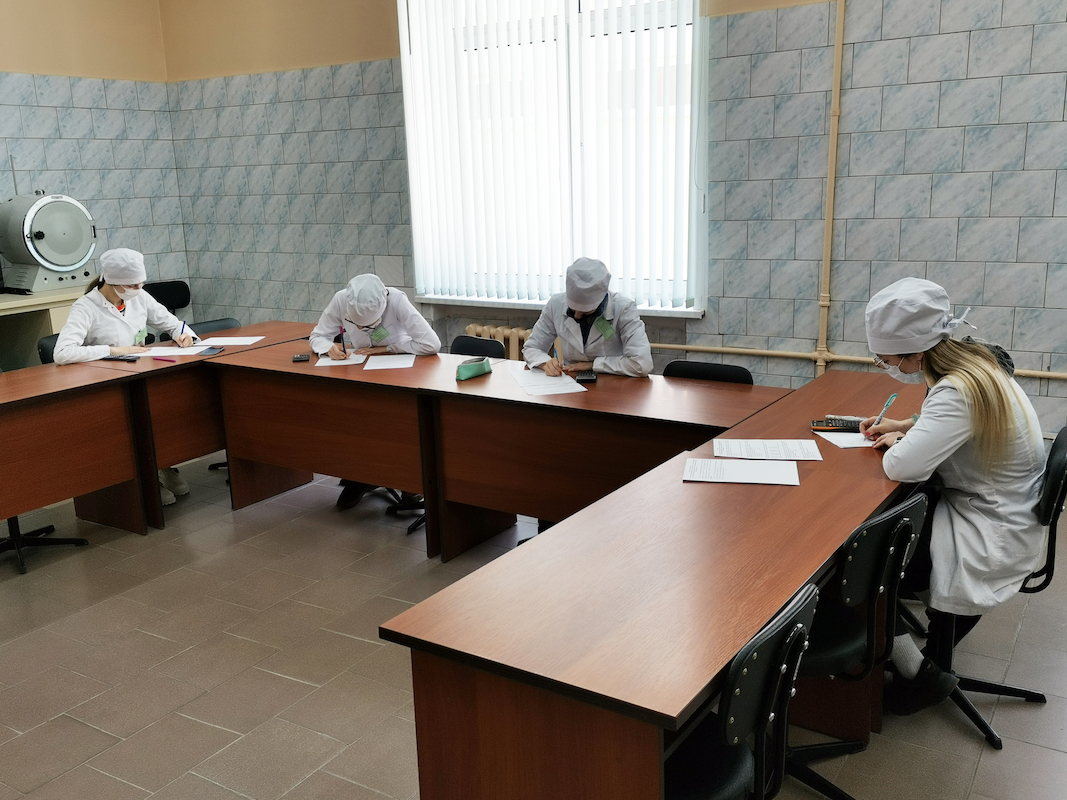 On 23 and 24 March 2022, an interdisciplinary intra-university academic Olympics “Step into the profession “Pharmacy” was held. It is held annually in order to identify talented, active and creative students, to improve the theoretical and practical training of future specialists, to motivate students for professional, social and personal competencies, to stimulate educational, cognitive, scientific and practical activities of students.

I, Zaruba Dina, myself acted not only as a correspondent, but also as a participant of the Olympics.

The first stage took place on 23rd of March in the evening, in which we had to solve 50 test questions in the DO2 system.  I must say, the questions were very interesting and not at all similar to those that we usually solve for classes.  There were questions on logic and knowledge of theoretical material, situational tasks and common definitions.

As for the results of the first round, all participants were allowed to the practical stage, which took place on Thursday 24th of March.  The first test was to manufacture a dosage form at the Department of Pharmaceutical Technology by 3rd-year students. Then all students moved to the Department of Organization and Economics of Pharmacy with the course of the Faculty of Advanced Training and Staff Retraining. No one could even image that one of the tasks would be puzzles! It was very fun and interesting. Later, forth-year students were offered tasks on material balance, testing tablets according to the State Pharmacopoeia of the Republic of Belarus, dilution and strengthening at the Department of Industrial Technology of Medicines with the course of FAT and SR. At the end of the Olympics, the Department of Pharmacognosy with the course of FAT and SR prepared herbarium samples for fourth-year students, and medicinal plant materials for third-year students.  It was necessary, as usual, to write the family, genus and species of the plant, medicinal plant materials, the group of biologically active substances, pharmacological action and dosage forms.

The Olympics turned out to be very exciting.  It was interesting to solve tasks using industrial technology, because not only accuracy but also speed was important: only an hour was given to solve these tasks. It was nice to revise pharmacognosy.  Just when the week of “survival of knowledge” is taking place at the university, we also had our own at the Olympics. I was also pleasantly surprised by the tasks on the Organisation and Economics of Pharmacy.  So, I really liked both the theoretical and practical parts.

Anton Rubakov, a 3rd - year student of the Faculty of Pharmacy, commented on the Olympics as follows: “Prescriptions based on Pharmaceutical Technology were moderately complicated.  The good thing is that this Olympics was like a rehearsal for our practical skills. The atmosphere and the grading systems were appropriate. I would also like to note the tasks for the Organisation and Economics of Pharmacy turned out to be so interesting and outstanding.”

Kravchenko Roman - Head of the Laboratory of Professional Excellence “Pharmacy”.  I asked about his impressions of the Olympics. He said “The organizers made a point on various issues related to pharmaceutical technology, industrial technology, organisation and economics of pharmacy and pharmacognosy.  Tasks have been developed covering many aspects of pharmaceutical activities. The departments, where the practical stage was held, showed a high degree of material equipment and competency of the employees involved in the Olympics.  It’s nice that the students showed a keen interest in all stages of the Olympics, and after its completion they shared their emotions enthusiastically. I think the academic Olympics was held at the highest level.”

The results were distributed as follows:

Summing up, I want to thank the organizers of the academic Olympics!