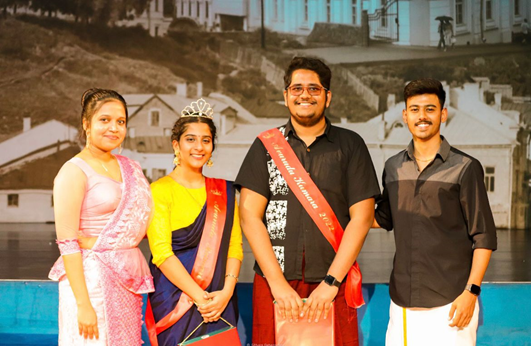 “The Sinhala and Tamil new year” was celebrated by the Sri Lankan students in VSMU on Sunday, the 10th of April. It was organized by The SLMSU of VSMU. It comprised of both, an outdoor and indoor event as usual.

The students were divided into four teams: red, yellow, blue and green. The outdoor event was held in the morning and afternoon at the ground in front of Hostel No:1. It consisted of many Sri Lankan folk games in which the students participated representing their teams and also each team made a traditional “Avurudu table”, a showcase of traditional sweetmeats made especially for the new year.

The indoor event was held at the Vitebsk Concert hall in Frunze in the evening. It was delightful with everyone being dressed in their colourful traditional attire. The event was filled with the performances of talented students. Like in every year they chose “Avurudu kumara” and “Avurudu kumariya” (prince and princess). Gleshan Subasinghe and Kanishka Selvaraj grabbed the titles.

For the games and performances points were awarded for the teams. Team blue with the most points were the winners for this year’s event.

Kavinda De Soyza, the 5-year student of the faculty of overseas students training